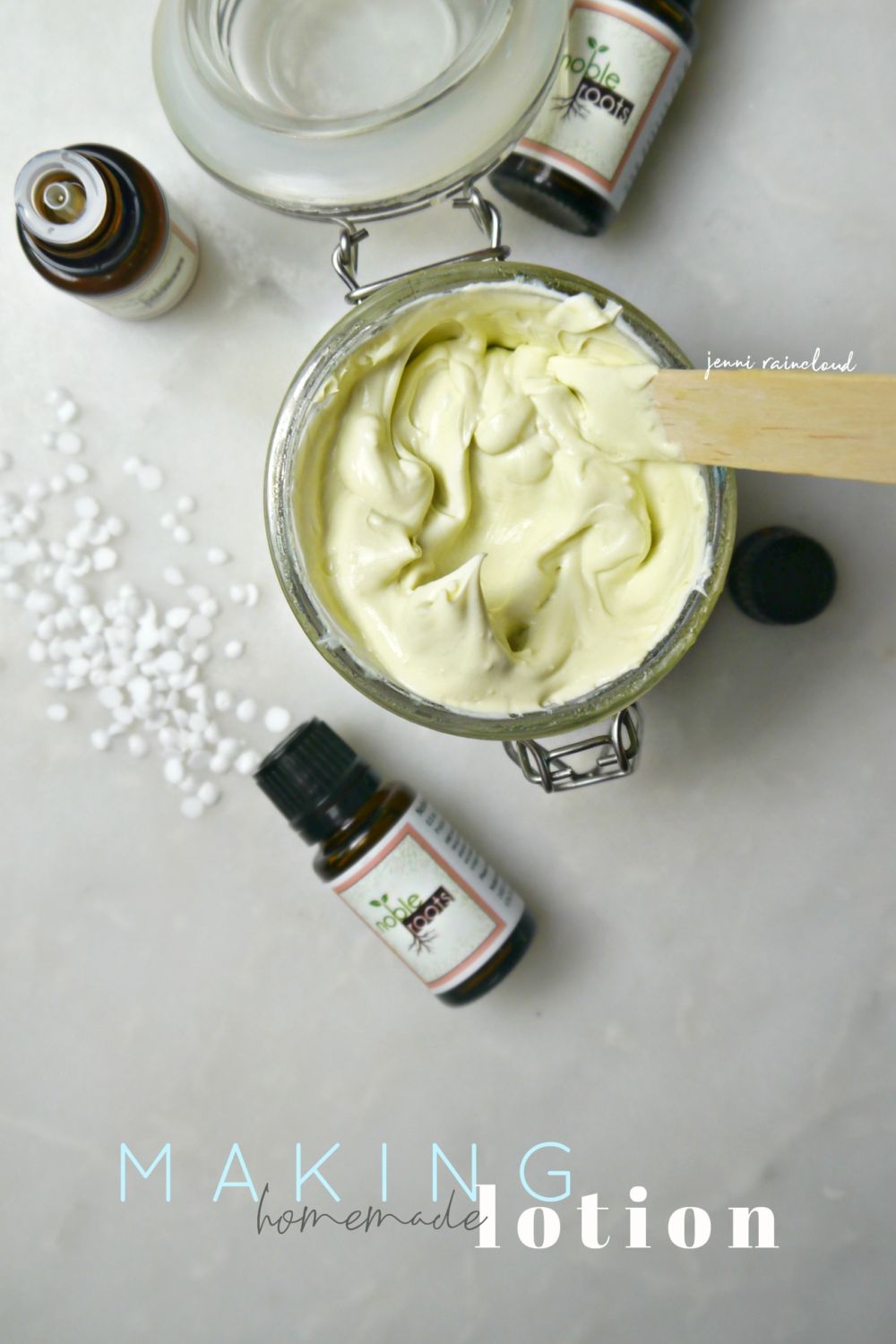 I know that making homemade lotion can be daunting so I wrote an extensive beginner’s guide to homemade lotion making with only a 3 ingredient recipe.  Lately, I’ve been on a lotion making kick on a mission to make a thick, super moisturizing lotion that I need for my legs and heels.  I’ve discovered a few new tricks and befriended an expert in making skin care that let me pick his brain on getting the perfect homemade lotion!

In order to make lotion you will have 2 phases.

First is a water phase that contains water based ingredients such as distilled water, hydrosol, glycerin, hyaluronic acid, aloe vera etc. plus a natural preservative I use Neodefend).

The second phase is your oil phase that contains oil based ingredients such as oils, butters as well as emulsifying wax.

Both of these phases must be heated on the stove top separately and reach the temperature of around 170F degrees before they can be combined.  Once you pour one phase into the other phase, you must blend with a blender or immersion blender on and off until the lotion begins to thicken.

How to Avoid Watery Lotion:

I’ve had a few of you mention that your homemade lotions are too watery or that they did not stay emulsified.  I’ve never had that problem until last week which prompted me to reach out to the in-house formulator at Noble Roots.  Despite using a new ingredient, cetyl alcohol, which helps thicken lotion on top of my usual amount of emulsifying wax, I had the most watery lotion ever.  It truly made no sense.  After talking to him, we realized that it came down to the whisk attachment I used to mix the water and oil phase.  I usually use the emulsion blender attachment but decided to see how the whisk worked.  Turns out, the whisk was not fast enough or aggressive enough!

“The amount of energy put into the formula at this point has an effect on how small the particle size of the two phases are.  The smaller/tighter the better.  Energy can by thought of as heat and mixing speed/aggressiveness.”

In conclusion, use THIS type of emulsion blender and ditch the whisk attachment.  Be sure to mix your lotion thoroughly.  I typically mix for 1 minute straight then come back in 5 minutes to mix again.  Then I continue to mix for an hour or so until I notice the lotion thickening up.

I decided to experiment with the already made watery batch and reheated it thoroughly and added another tablespoon of emulsifying wax.  I have told readers that this might thicken their mixtures up but I’ve never tried it myself.  Low and behold, it works!  Once the wax had thoroughly melted, I removed from the heat and used the proper blender attachment.  Within 30 minutes, my lotion was thick and fluffy and has stayed that way!  No need to throw out watery batches! 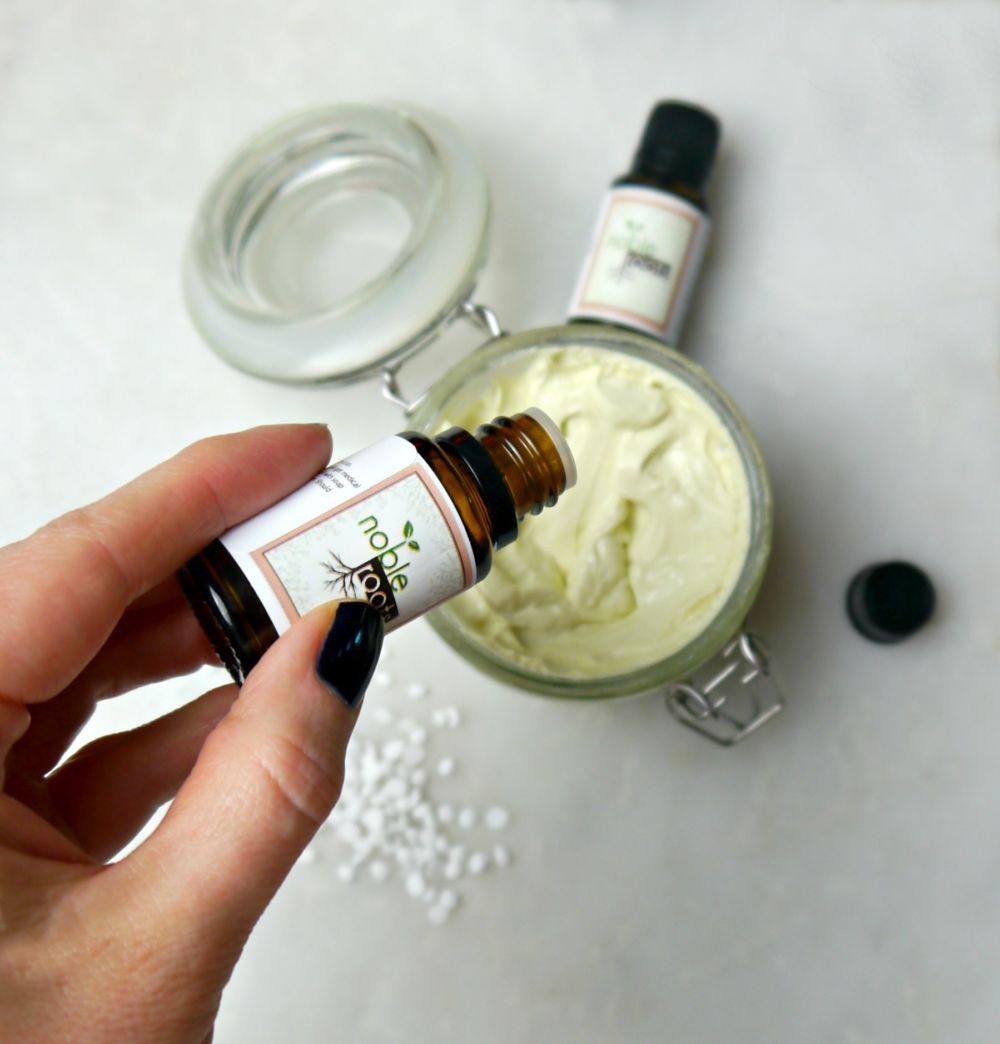 I typically get my ingredients from Mountain Rose Herbs but Noble Roots, another ingredients supplier, offers 2 products I can’t get from MRH-cetyl alcohol and natural fragrances.

Cetyl Alcohol is a plant-derived fatty alcohol used as an emollient, emulsifier and thickener. While its primary function is emulsification, it also adds softness and conditioning effects to skin and hair care products.  My lotions have turned out thicker yet fluffier with this new addition!  You should know that cetyl alcohol does not contain the type of alcohol that is harsh and dries out the skin.

As an emollient, cetyl alcohol has the ability to soften and smooth the skin.  It helps to reduce rough, flaky skin. Emollients are also occlusive agents, which means it provides a layer of protection on the skin that helps prevent water loss from the skin.

I also tried out a few natural fragrances!  NobleScent™ Natural Fragrance oils are unique whole plant extracts containing both the essential oil and the extract portions of the plant. They are 99.9% natural with most of them containing 10% essential oil.

I love using these natural fragrances and even add my favorite lavender essential oil to them for an even better scent!!

I hope this post helped if you enjoy making homemade lotions but tend to run into frustrations.  As I was writing, it kind of felt like this was a very random post but hopefully it was helpful to someone.  I definitely wanted to share that I was able to salvage watery lotion because nothing is more defeating then throwing way a batch of expensive ingredients!

Early next week I’m posting a new lotion recipe that is the best one I’ve made yet and the best smelling one too!!  Stay tuned for that!