Flourish Probiotic-A Living Liquid That Has Changed My Brain.

Achieving gut health will be the most important thing you do for your health. Doing this is not easy given the convenience of processed foods and sugars, daily stress and pharmaceuticals but I have an easy solution that will get you well on your way to better immune health, brain health and gut health. Flourish Probiotic is by far the most effective probiotic I have ever taken-and that’s saying a lot since I’ve taken so many. Flourish is a liquid probiotic with 11 strands of bacteria that are delivered to you still alive. Forget those freeze dried pills! 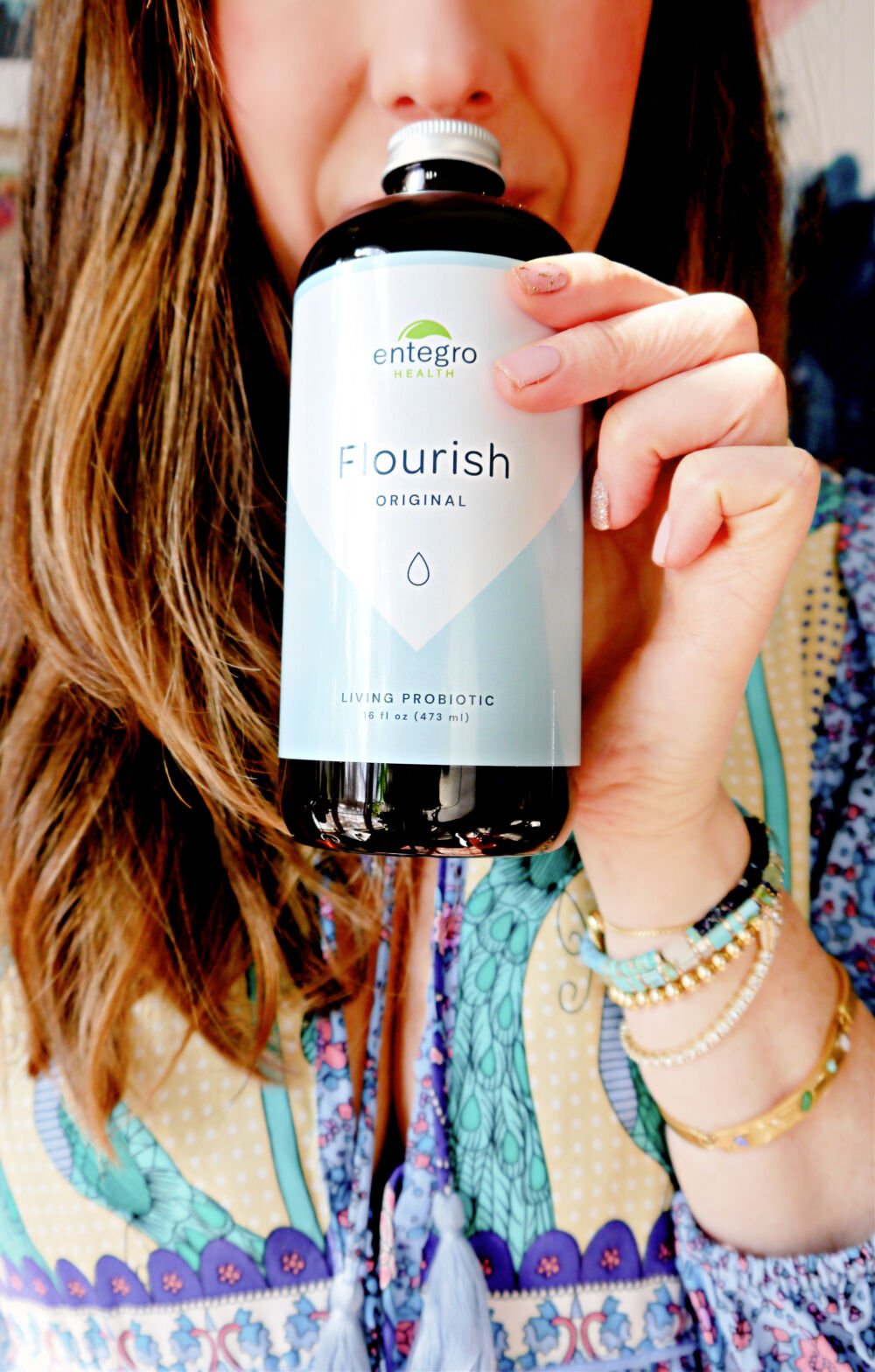 I am obsessed with gut health.  Weird statement, but it’s the truth.  When a living, liquid probiotic came across my path, I was intrigued to say the least!  Lord knows, good bacteria strains that can survive the stomach environment are hard to come by.  In a compromised gut, finding strong strains that work together to proliferate and kill the bacteria before the bad bacteria can fight back seemed like a distant dream, until now…

Ever since I was a kid, I’ve had stomach issues.  Anytime I would experience stress, stomach pain would set in.  When I was 15, I was put on antibiotics to clear my acne-BIG MISTAKE!!  Not knowing the harmful side effects of antibiotics, I continued to be on antibiotics for over a year.  I immediately started experiencing chronic ear infections which prompted strong antibiotics and by the time I was 17, my gut was massively out of balance and I’ve struggled with digestive issues ever since.

I suspect leaky gut and SIBO have resulted from my prolonged antibiotic use.  I’ve used one probiotic after another experiencing temporary relief for a time but never really feeling like the probiotic was actually proliferating good bacteria fast enough to fight the bad bacteria.

These days, I work on my diet and have eliminated grains and gluten and eat very little dairy.  This has helped immensely but the missing piece was truly a potent probiotic that could survive the stomach environment and deliver enough good bacteria that could survive and fight the bad.

After all, Hippocrates, the “father of medicine” did say, “All disease starts in the gut”.  This has been researched and supported over and over since again and in my opinion is the first and foremost issue to be addressed when on the path to optimal health.

I’ve been following several new people on Instagram and one lady, who is a hard core researcher, was talking about a company called Entegro who have a liquid probiotic called Flourish.  It greatly appealed to me that it was in liquid form because most probiotics are put through quite a lot to get them in pill form.

What’s the Difference in Flourish Probiotic?

Flourish is a live, liquid probiotic.  Because the bacteria is in liquid format, it is in the most natural state that a probiotic can exist.  Also, it has 11 different strains (5 different genera) of bacteria living together.

They believe in the theory of consortia, which is the process of co-growth that combines multiple strains during production.  Each strain develops while interacting with other strains.  These strains are grown together in community, resulting in microorganisms that become a small eco-system, much more resilient and  capable of working together synergistically.

In nature, strains do not exist in isolation.  Most probiotics are in powder from and the strains have been grown individually and combined only after having been centrifuged and freeze-dried.

Because Flourish’s strains are in their most natural state and are living, the active beneficial bacteria can retain all of the beneficial metabolites and organic acids released by the bacteria during their normal lifecycle.  These metabolites also have benefits for the human body, especially the brain and immune system. 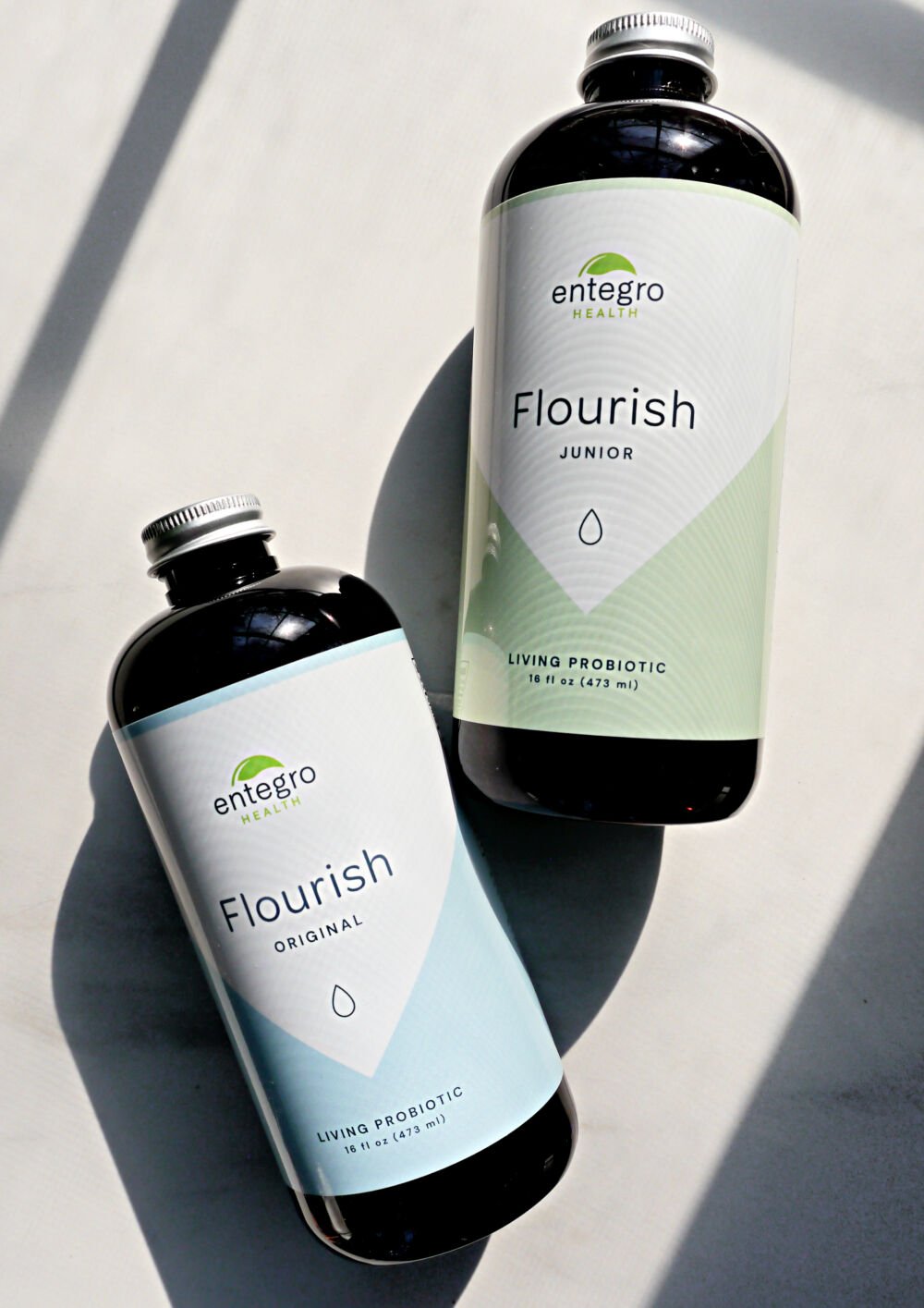 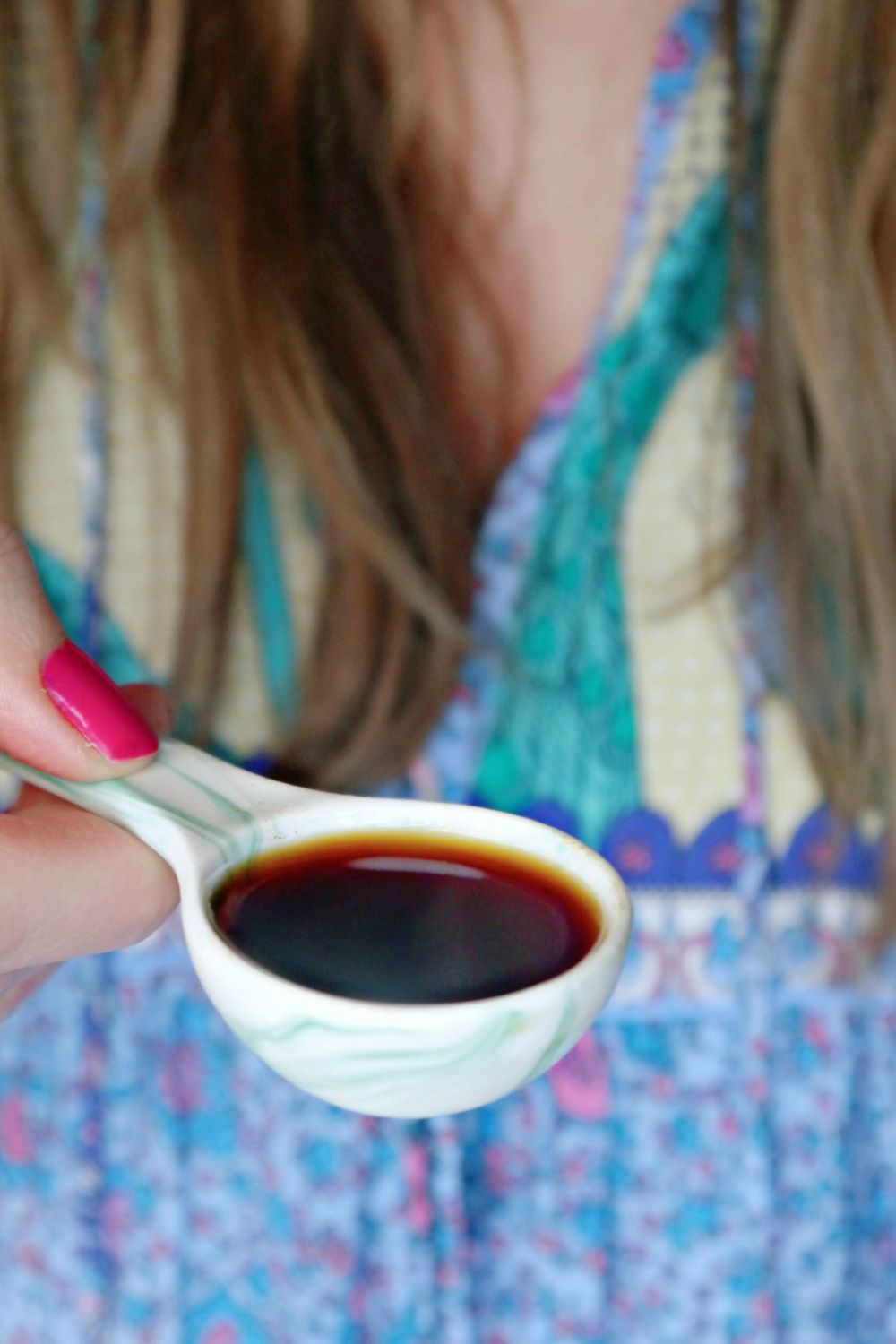 My Experience with Flourish:

I have tried many probiotics and each time would deal with a good deal of bloating, constipation and gas in the beginning.  Not wanting to deal with more stomach upset, I took only a teaspoon of Flourish the first week.  Because I had already begun to experience so much relief with going grain free, I am not exactly sure how much relief is from Flourish and how much is from my diet.  I’ve continued to take a tablespoon of Flourish every morning for 2 mos. now and feel great.

Here’s the exciting part-A little over a week ago I noticed this feeling of well-being.  I’m talking happiness on a whole other level that I haven’t experienced in decades.  I’ve always consider myself a happy person and throughout my adult life I’ve taken great effort in leaning into the positive and blocking negative thoughts.  I feel so blessed and feel that I have a wonderful and fulfilling life.  However, I experience anxiety.  Anxiety that doesn’t merit the situation.

I also deal with a lot of brain fog and can often feel very flat.  Nothing is wrong, I am just not excited about life at times.  I figured it has a lot to do with my age and normal baggage of life.

I started to question what could be causing this euphoric feeling?  I’m at an all time high with my health lately and have been immersed in research and learning.  I have overhauled my supplements as well as my diet and so I’m taking several new things that could be contributing but my gut (pun intended) and the Lord are telling me it is Flourish along with going grain free.

Eliminating grains can do wonders for your gut.  No grains can also result in brain clarity-No more “grain brain”!  Paired with a living probiotic, I believe my mental health has greatly improved.

While trying to make the connection between my new found happiness and which supplement could be causing it, I read that over 90% of the body’s serotonin is produced in the gut, not the brain.  Ding, Ding, Ding!  Serotonin is the feel good chemical our bodies produce and when the gut is compromised, serotonin levels dwindle.

Flourish is the most effective probiotic that I’ve ever encountered.  Because of that, good bacteria can quickly start to proliferate in the gut.  This means that the good bacteria from Flourish will begin to fight the bad bacteria that is already there.  As the bad bacteria begins to die-off, you often will get symptoms like gas, bloating and diarrhea.

These symptoms are temporary and it’s important to drink more water in order to help the detox process.  I personally did not experience any noticeable symptoms.  I did start out with only 1 teaspoon and move to a full tablespoon after a week.

You might be wondering how does it taste?  It’s an odd taste, I’ve got to admit.  However, I don’t mind it at all.  I got used to it on day 2.  If you find it offensive, you can put it in a liquid.  Flourish Junior is the exact same formulation as the adult Flourish except that Junior contains sorghum to sweeten it.

Flourish can be taken on a full or empty stomach.  I believe empty is the best though.  It is preferable to store it in the fridge for a longer shelf life.

Here’s a fun fact: You would have to drink four to five entire 16 oz. bottles of kombucha to get the same “dose” of probiotics that you would get from one tablespoon of Flourish Probiotics!

I am so thankful I’ve found Flourish.  I truly, truly believe it is the way to go and that everyone should be on it.  There is not one person that should skip taking a probiotic and why waste your money on freeze dried after finding a live liquid?

Flourish Junior can even be given to newborns.

How Much Does Flourish Cost?

Flourish and Flourish Junior are only $30 a bottle which should last a month if you’re taking the recommended dose of 1 tbsp. a day.  That is cheaper then all the other probiotic brands I’ve taken!!  Also, once you determine whether you want to continue taking it after your first bottle, you can sign up for auto ship and receive a discount on each bottle!  I’ve been very impressed with this company, their practices and their customer service.

Just so you know, because I have come to love this product so much, I have become an affiliate which means, if you buy a bottle from a link in this post or my social media, I will get a small commission.  Flourish having an affiliate program was a happy bonus but had no bearing on me trying the product.  Entegro did not contact me, I happened upon them.

Hope you try it-I know you’ll benefit and I’d love to hear about it!

Update: Over 2 years later and I still am enjoying the benefits of good gut health thanks to Flourish. My whole family is on it (including my parents) and I still stand by this probiotic 100%. I highly recommend you try it-it truly is like no other probiotic I have ever tried! 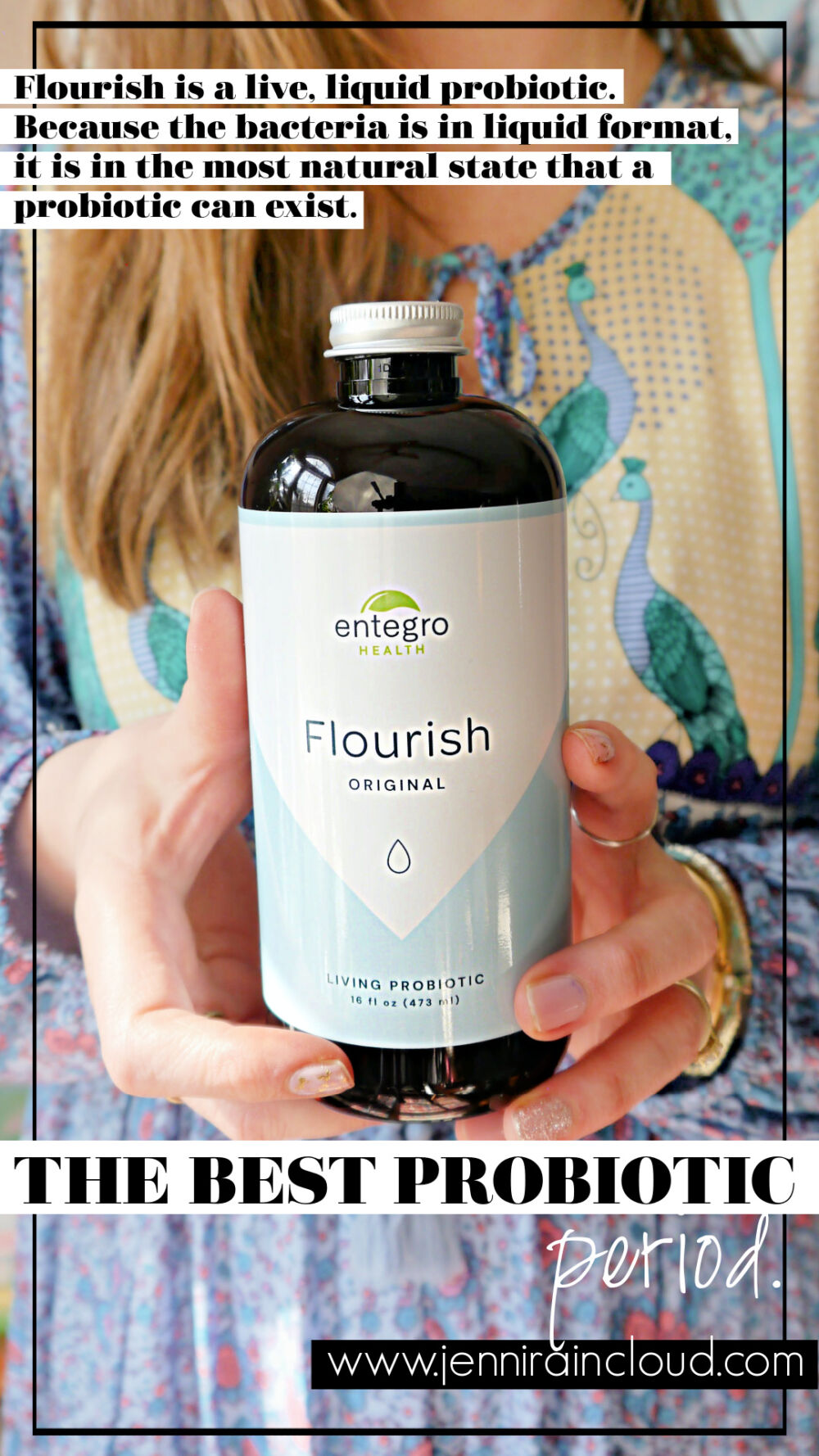 18 thoughts on “Flourish Probiotic-A Living Liquid That Has Changed My Brain.”